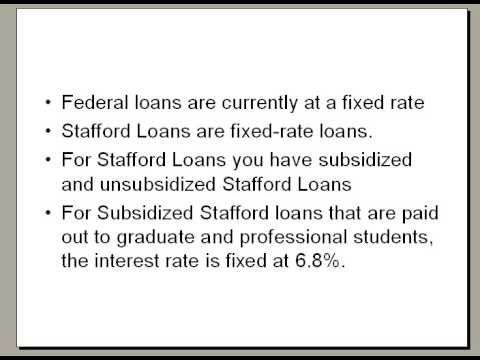 Federal loans are currently at a fixed rate, but that can change. Originally, the federal interest rate was a fixed rate, later turned into a variable, but on July 1, 2006 it returned back to a fixed rate. With federal loans there is a possibility it may change in the future. Federal loans include Stafford Loans and PLUS Loans.

For Unsubsidized Stafford loans, the interest rate is fixed at 6.8%. This is disbursed to undergraduates and graduate students.

A private loan consolidation company is a private creditor or company. Their interest rates vary. Interest rates are based on either LIBOR (London Interbank Offered Rate) or the prime rate. The credit history is also considered for the student and co-signer. These loans are variable or have a fixed rate that changes according to the agreement in the promissory note. In some cases some private student loan consolidation loans could be the same rate as federal to compete with federal low interest rates.

How To Use A HELOC To Buy Real Estate

Is Mortgage Refinancing A Good Idea?

How To Use A HELOC To Buy Real Estate